For this months “Mottomonat” Cyw wants a “Winter Scene”. I wasn’t sure what to do at first, but then – thanks to the current episodes of “Once Upon a Time” 😉 – decided on a “Frozen” inspired look: 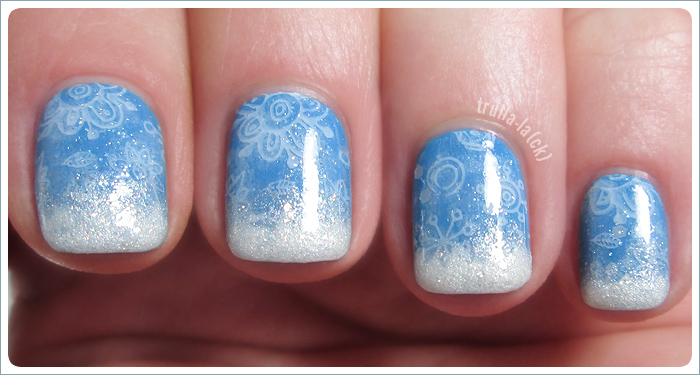 I started with two coats of “seaside rendezvous”, a bright blue, and sponged a bit of the lighter “sparkling ocean” and “absolutely blue” on top. Maybe someday I will learn not to get fooled by its pretty look in the bottle, and remember that Nubar’s “White Polka Dot” is just not visible on the nails, except for the very few larger hexagons. But not today, so I painted one coat on top to get – ha, ha – some extra sparkle…

After it dried, I used a plate from MoYou London that reminded me of ice flowers, and used not a stamping polish, but a simple white color to get a softer look.

Starting from the tips and fading out after the french line I first sponged on “laser show” – making sure not to get any of the black glitter on the nails – then added the same white I used for stamping. I finished it with “Lady”, a textured polish because I wanted to give it the 3D look of real snow. 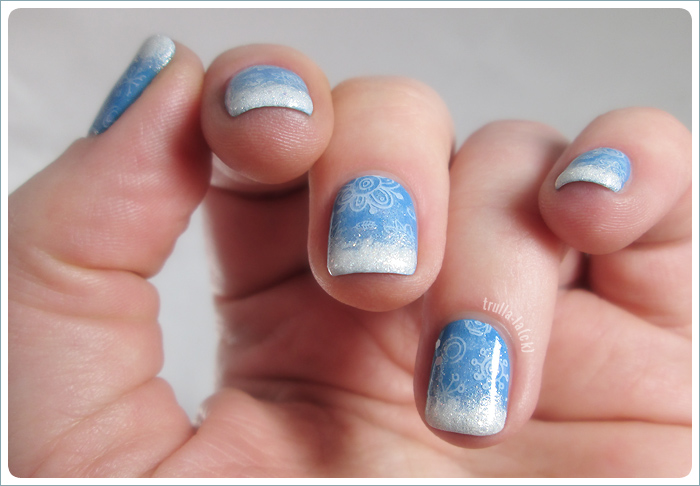 I really like how it turned out, and although the tips are quite thick thanks to the many coats and the textured polish, I think Elsa would approve. 😀 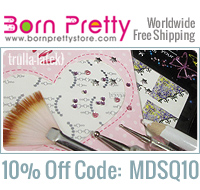